5 Most Affordable Convertibles in the US 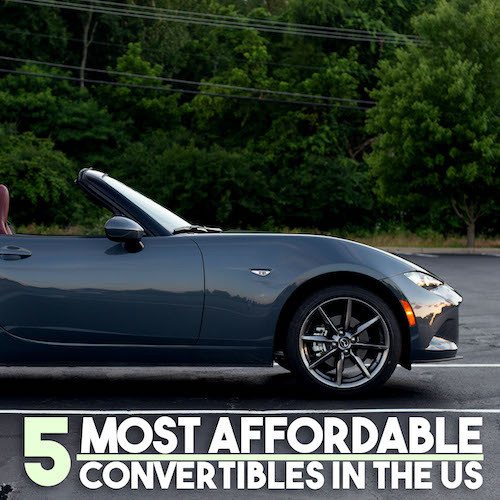 Although the word “convertible” may evoke images of luxury cars with expensive price tags, reality is fortunately quite different. Buyers shopping for convertibles don’t necessarily have to scour the used market or shell over US$40,000 or more for the ability to put their car’s roof down on a nice day.

Instead, choices abound. Sure, the multimillionaires can drive their Aston Martins, Bentleys, and Rolls-Royces (just to name a few) to their hearts’ content, but this is just one extreme of the MSRP spectrum. On the other end—opposite those $200,000 to $500,000 displays of opulence—are the extremely affordable convertibles, and they number many.

Relatively inexpensive products may have negative connotations, yet few can be applied to the majority of the vehicles on our list; track records of questionable reliability aside (hint: if a certain Italian car manufacturer comes to mind, you’re on the right track). Nevertheless, convertible connoisseurs on a budget will be happy to drive away with any of the following vehicles.

Some may consider it cheating, but the ever-popular Jeep Wrangler is a bonafide convertible: remove its soft or hardtop roof and you have yourself a convertible experience just like any other, with the added benefit of removable doors, of course.

The base trim (Sport) Jeep Wrangler two-door comes in at just $28,295 in the US, making it one of the most affordable convertibles around. For that money, you’ll get rugged looks with rugged off-road performance to match, although the recently released Ford Bronco might have something to say about that.

Diminutive and distinct, the original Mini hatchback has been a staple of British automotive design since 1959. Although redesigned in 2000, its light weight and sharp handling characteristics were retained. Paired with a range of available peppy engines, the driving characteristics of the appropriately-named Mini Convertible are almost as endearing as its looks.

Although $27,400 won’t get you a manual transmission, a seven-speed dual-clutch will instead prove a suitable (although perhaps not optimal) companion to your new convertible soft top.

Few cars are as iconic as the venerable Mazda Miata, otherwise known as the MX-5. Like the Mini, the Miata follows a tried-and-true formula for fun: lightweight, sharp handling, and a manual transmission. However, it’s the Mazda’s rear-wheel drive which truly sets it apart from the Mini and makes the Miata one of the most exciting cars on the road, even with a deceptively unexciting power output of 180 horsepower and 151 pound-feet of torque.

$26,580 is enough to get you the base model Miata soft top, with higher trims naturally commanding higher prices. A soft top isn’t the only current Miata available though, as Mazda unveiled the Miata RF hardtop in 2017—starting at $33,045 for interested buyers.

Temporary partnerships between manufacturers aren’t uncommon in the automotive world, and a recent partnership between Mazda and FCA (Fiat Chrysler Automobiles) was just one example. This particular partnership resulted in a peculiar vehicle: the Fiat 124 Spider. Although largely based on the ND (current generation) Miata, the 124 Spider isn’t just a Miata with some mozzarella sprinkled on top.

For $25,440, the 124 Spider utilizes the proven underlying platform and mechanical components of the Miata with some unique tweaks by FCA in the form of an FCA engine, shocks, and exterior styling. Cargo capacity and length were also slightly increased over its Japanese twin.

If you live in North America and want your chance to drive a Fiat 500, you have to act fast—poor sales have plagued this model for years and thus FCA announced plans to discontinue production of the Fiat 500 and 500e in North America. Existing inventory of these models will last into 2020 but beyond that, prospective buyers will have to turn to the used market.

If you’re not put off by a track record of questionable reliability, $17,990 will earn you a base model Fiat 500 Convertible with soft top construction: by far the most inexpensive new convertible you can yet buy.

From the rock-crawling Jeep Wrangler to the zippy Mini Convertible and classic Mazda Miata, there’s an affordable convertible on sale in the US for almost any buyer. If safe to do so, schedule some socially-distanced visits to your local dealerships to go on test rides of their available convertibles: there’s bound to be one you’ll love enough to consider taking home!