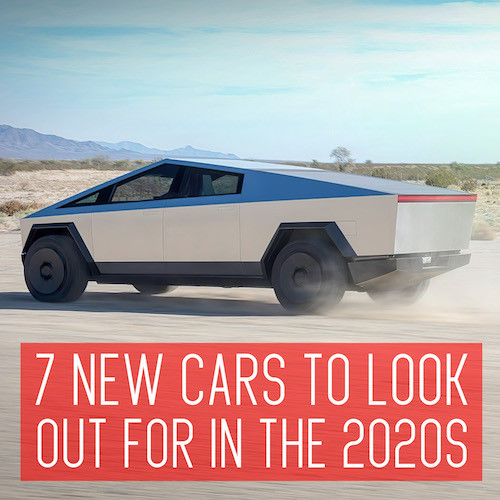 With the 2020s finally upon us, this new decade promises to be an interesting one for the car world. The global automotive industry moves incredibly quickly—technology, safety tech, speed, and performance, all these elements of automotive design progress at a blistering pace.

This, of course, results in new cars that are safer, more fuel efficient, capable, and holistically better than their predecessors. This rule encompasses every class of vehicle, from sedans, to crossovers, to sports cars and multi-million dollar supercars.

It’s a great time to be in the market for a new car. Some manufacturers are resurrecting discontinued nameplates, some are refining venerable designs, and some are releasing brand-new designs. Here are just seven of the cars we’re most excited to see in the 2020s.

In November 2019, Tesla unveiled perhaps the most polarizing vehicle of the year: the Cybertruck. With an exterior composed of large, flat panels bisected by sharp contours, this unorthodox electric pickup was met with mixed opinions, to say the very least.

Hate it or not, look past the exterior and you’ll find a surprisingly capable electric vehicle. Tesla promises 250-500 miles (400-800 km) of range, optional all-wheel drive, and a large cargo area. Pre orders cost just $100 and a whopping 250,000 have already been placed.

The Tesla Cybertruck wasn’t the only recently-unveiled vehicle plagued by controversy. Ford released an EV of their own in November 2019 in the form of the Mustang Mach-E. Besides being an EV, the Mustang Mach-E is not quite the Mustang sports car you may be picturing.

Instead, the Mach-E is a compact five-door crossover, and this is why some grumblings have arisen from Ford purists. Although no V8 Mustang, the Mach-E instead puts its capabilities on display with its range (250-300 mi; 400-480 km), cargo space, and quick charging.

For nearly 50 years, Volkswagen has provided the world with an economical, fun, and practical car with its venerable Golf hatchback. Now entering its eight generation in 2020, the Mk8 Golf is set to continue the legacy of the Golf nameplate.

In its native Europe, the Golf will be offered with several engine options, among them a mild hybrid powertrain utilizing a small motor. If you live in the US, you may be a little disappointed to hear VW plans to only offer the performance GTI and R trims for sale in the states.

The Golf Mk8 won’t be the only new hatchback released in 2020, as Mini will join the fray with its Mini Electric (or Mini SE, depending on the market). The Mini Electric represents a first for the long-standing British marque as the first ever mass-produced EV in its long history.

Starting at just under $30,000 in the US, Mini promises 110 miles of EPA-estimated range thanks to a 32.6 kilowatt-hour battery. Plus, 181 horsepower means this Mini will likely retain the peppy performance characteristic to standard ICE Minis.

Perhaps the complete opposite of a small, peppy electric hatchback is an enormous, gas-guzzling SUV, but that’s exactly what the Hummer was. In its heyday, there was no other vehicle that had quite the character of the original Hummer H1.

However, times have changed since the last H1s, H2s, and H3s rolled off the assembly lines. Now, General Motors seems intent on reviving the Hummer nameplate in a way nobody could have expected: GM’s new Hummer will reportedly be an all-electric pickup truck!

In 1983, Land Rover introduced the now-legendary Defender, a bonafide off-road SUV which was in continuous production for 33 years. While production of the Defender ended in 2016, a new model—internally known as the L663—has taken its place.

The 2020 Defender features permanent all-wheel drive, locking differentials, and a two-speed transfer case. Although it differs from the original Defender in its use of an aluminum unibody instead of a body-on-frame design, Land Rover promises capable off-road performance.

For 67 (albeit nonconsecutive) years, the Corvette nameplate has been a staple in the automotive world. Through seven generations, the Corvette has been the king of affordable performance and incredible value for the money, all the while retaining a front-engine design.

In 2019, GM made history by unveiling the first ever mid-engine Corvette: the C8. Starting at just $59,995 in the US, the Corvette’s legacy of incredible value continues. A standard DCT, 490 horsepower, and optional MagneRide suspension seal the deal, all at under US$100,000.

… AND THERE’S MUCH MORE TO COME!

These seven vehicles represent just a small fraction of the vehicles the 2020s will have to offer us lucky consumers. With the rapid pace of technological advancement, we will continue to see even better and better cars come out as the decade progresses.

What cars are you looking forward to seeing and adding to your garage? Comment down below and let us know!

Valuable info. Lucky me I found your web site by accident, and Im shocked why this accident did not happened earlier! I bookmarked it