All About the New Ford Bronco 2021 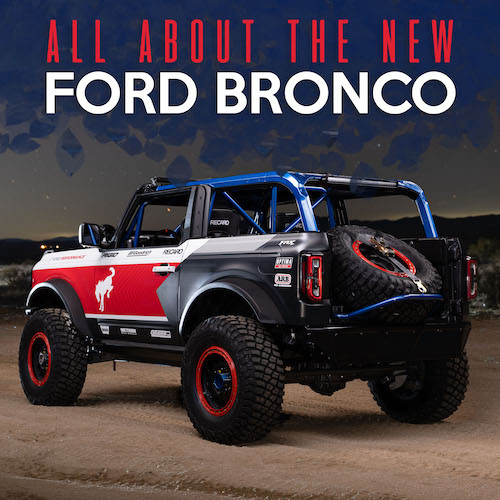 In July of 2020, off-roading enthusiasts around the world rejoiced as Ford brought back the venerated Bronco nameplate in the form of an all-new SUV. The Bronco, in continuous production since 1965, took an extended lapse in production after its cancellation in 1996. The new Bronco promises to be a bonafide off-roader with plenty of practicality for the street too, where most Broncos will likely spend most of their time.

Plus, the equally-celebrated Jeep Wrangler will finally have a direct, proper rival once again; only better for enthusiasts, as now Ford and Fiat Chrysler Automobiles (we’ll just call them FCA) will be forced to adapt to the other to produce the best product for the end consumer.

But how will the Bronco really stack up? We won’t quite know until journalists and consumers alike can get their hands on them, but the specs are quite promising. If the new Bronco is anything like its previous generations, Ford will have a commercial winner in its hands.

Through five generations spanning four decades, the Bronco evolved, starting from a compact SUV and then transitioning into a full-size SUV after its first generation. What remained a staple of its DNA—and what helped make the Bronco, well, the Bronco—was a two-door layout, off-road prowess, and an optional V8 engine.

However, it was the events of June 17th, 1994 which would bolster the Bronco’s fame (infamy might perhaps be the better word in this context) as O.J. Simpson led police on a low-speed chase through Los Angeles in his white Bronco. An estimated 95 million viewers would witness this chase and Simpson’s vehicle of choice.

Despite posting strong sales and recently experiencing a newfound degree of fame, Ford cancelled the Bronco in 1996. Until now, no Ford vehicle had filled the niche of the Bronco or brought such satisfaction to consumers as it did. After a 24-year hiatus, the Bronco is back and—Ford will tell you—better than ever.

The new Bronco picks up where the previous generation left off, with a few caveats. For the first time in the history of the Bronco nameplate, the new Bronco will not feature a V8 engine; much to the chagrin of purists. Purists will however welcome the inclusion of an optional 7-speed Getrag manual transmission. A 10-speed automatic transmission, the product of a partnership between GM and Ford, is also available.

The lack of a V8 engine isn’t the only way the Bronco will stray from tradition, though. As Car and Driver reports, the U725 (Ford’s internal project code for this generation of Bronco) will be offered not only in standard two-door configuration, but four-door configuration as well. Although this will break tradition as the first available four-door Bronco in Ford’s history, it’ll be better positioned to directly compete against the Jeep Wrangler Unlimited four-door.

With a starting price of US$29,995 for the base trim two-door Bronco, Ford takes another direct shot at the Wrangler. For this price, you’ll naturally get the weaker of the two available engines: a turbocharged 2.3-liter inline-four producing 270 horsepower and 310 pound-feet of torque. Step up in price and Ford will be happy to provide you a twin-turbo 2.7-liter V6 generating 310 horsepower and 400 pound-feet of torque.

The 10-speed auto is available for both engines, but those looking to manually row their gears may be disappointed to hear that the 7-speed manual is exclusive to the more powerful V6. In either configuration, power is sent to Dana front and rear axles as part of a standard four-wheel drive system, with all-wheel drive being optional.

TO THE RAPTOR AND BEYOND

With the release of the Bronco, Ford is putting its off-road prowess on display for the world to see and directly challenging the ever-popular and ever-capable Jeep Wrangler. With Ford confirming an optional hybrid powertrain for the Bronco in the future, its capabilities will be even further increased.

The planned Bronco Raptor will surely holistically improve on the standard Bronco’s already-impressive suite of off-road specs: optional 35-inch mud-terrain wheels, beadlock-capable wheels, electronic locking front and rear differentials, and a plethora of other specialized aides (we’d be remiss to not mention the 11.6 inches of maximum ground clearance and 3,500-pound towing rating).

With an impressive legacy to uphold, the 2021 Ford Bronco will likely arrive in dealerships in the United States around spring 2021—something we’re very looking forward to seeing!