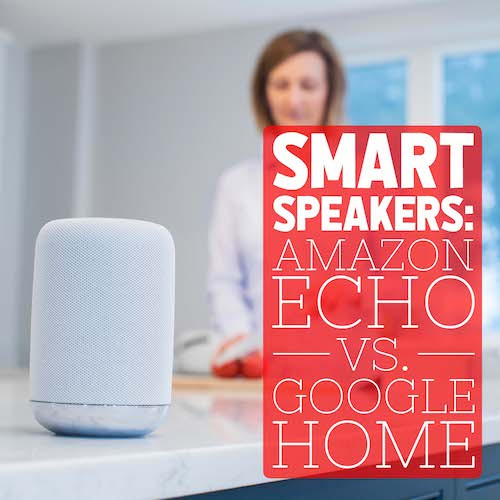 Smart speakers: Wireless devices which can play music, answer questions, turn off the lights in a home, and otherwise use specialized software to act as a virtual assistant, all with total hands-free operation.

Just five years ago, this would have seemed like a feature of some technological utopia, but in 2014, Amazon made it a reality with its release of the Echo smart speaker with Alexa virtual assistant integration. This device has evolved over the years, surging in popularity and selling tens of millions of units in 2018 alone. While Alexa is one of the most popular virtual assistants on the market, it’s not without its competitors. Apple, Google, and Microsoft are just some of the big names producing competing devices, with the HomePod, Home series, and Harmon Kardon INVOKE, respectively, making up each manufacturer’s contribution to the market. Although each device and accompanying virtual assistant is quite similar in terms of utility and operation, what exactly are the differences that set them apart, and which one is right for you?

Let’s take a look at two of the most popular based on sales figures alone: Amazon’s Echo with Alexa virtual assistant and Google’s Home series featuring the Google Assistant software.

First, a closer look at the similarities. Both Amazon Echo and Google Home are smart speaker devices designed to be used in one’s home, with the power to turn on and change music, give weather updates, control thermostats, and adjust light fixtures, among many more features. Both utilize hands-free operation; merely using your voice and “speaking” to either device is all it takes to make use of these aforementioned features.

One major difference that sets the devices apart (and that you’ll likely notice), however, is the variety of colors Amazon’s Echo series is offered in. While at first this may seem like a trivial issue, Amazon Echo gives you a better chance to seamlessly integrate your device into the decor of your home, with colors like charcoal, gray, sandstone, and imitation walnut available, perfect for matching a variety of furniture and interior styles. Additionally in regards to aesthetics, the Echo has physical buttons and a flat top design, versus the Google Home’s slanted top.

While the Home’s Google Assistant software is certainly capable in its own right, the Echo with its Alexa virtual assistant has thousands of skills which can perform virtually any home-related task imaginable. WiFi and Bluetooth integration is standard, as with the Google Home.

Using the Google Assistant software, Google’s series of Home devices—including the Home, Home Max, and Home Mini—goes toe to toe with Amazon Echo and its Alexa virtual assistant. The standard Home is a relatively small cylindrical device with an unobtrusive design. Its small size alone isn’t enough to let it seamlessly blend into all home decor, however, and the Echo’s color variety gives Amazon’s offering the slight edge in this regard. If size is a concern, spring for the Mini or Max, depending on your home’s needs and decor.

Where Google may score its first victory for you is in terms of familiarity: if you’re an Android user, you’ve likely already used the Google Assistant voice recognition software to check up on the weather, call a friend, or even find a local restaurant to grab a bite. Even if you’re not an Android user, you should find Google Assistant fairly intuitive and easy to learn. You’ll also have the ability to integrate your device with your TV and other devices with Google’s Chromecast technology.

Where Google Assistant scores an advantage is with its flexibility in terms of interpreting varied syntax; meaning you won’t have to stick to a rigid “script” to tell your device which task to perform as may sometimes be the case with Alexa. In a nutshell, phrasing your questions in different ways won’t confuse Google Assistant, making it slightly more user-friendly than Alexa. Furthermore, Google Assistant does a better job than its competitor at interpreting and answering questions asked in a chain, making voice interaction with your Home more of a true conversation than merely terse commands as may be the case with Alexa in certain instances.

Ultimately, both devices and their accompanying software perform their stated functions exceptionally well, making them some of the best smart speakers currently on the market. The Echo takes a first swing with its more flexible, varied design, but the Home responds with the ability to connect to your TV through Chromecast integration. While Alexa fires again with its huge range of commands, Google Assistant’s retort is a warmer, more conversational approach to question-and-answer interaction which may resonate more strongly with you. Both devices give and take advantages and disadvantages, with each filling the small feature niches which the other may lack.

Prices are similar too, with prices ranging as low as US$29.99 for the Amazon’s Echo Dot and Google’s Home Mini, to US$149.99 or more for each marque’s flagship device.

If you’re still conflicted between the two, the best thing you can do is evaluate your needs: which devices you already own (and their integration, if any with Amazon and Google’s respective devices), your budget, and which features you desire most. Whichever you choose, rest assured that the Amazon Echo and Google Home are two of the best smart speakers currently available on the market.