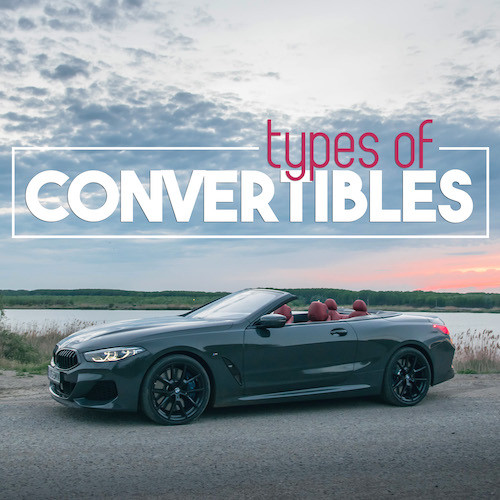 With summer and warm weather upon us once again, it’s the perfect time to enjoy convertibles. Modern convertibles, especially from high-end marques such as McLaren, offer much of the structural rigidity of their coupe counterparts while affording drivers the luxury of putting their roof down to enjoy a nice day.

However, while all convertibles enable one to drive without a conventional roof in place, several different types exist: primarily soft tops, retractable hardtops, and detachable hardtops. As with any design, each has its distinct advantages and disadvantages, and while superficially similar in form, they greatly differ in terms of mechanical operation.

When you think of the word convertible, the image conjured in your mind is likely one of a soft top—the most popular convertible design in the world. “Soft tops” commonly use a cloth-based material for their roof section, hence the name.

Despite their continued popularity, soft tops have several disadvantages which any potential owner must keep in mind before purchasing one. Firstly, soft tops intrinsically don’t offer the same level of structural rigidity that their hardtop cousins do. This difference can be felt particularly when comparing coupe sports cars to their soft top counterparts—although in everyday driving situations, the differences are generally less noticeable.

Soft tops are also more susceptible to break-ins and require more diligent maintenance to protect their appearance versus comparable hardtops. On the other hand, modern soft tops often deploy faster than hardtops and take up less trunk space, making them more practical options, especially for those looking for a daily driver.

Some examples include the Mini Convertible, Porsche Boxster, and Bentley Continental GT with an eye-watering starting price of $222,700.

In contrast to soft tops which are made out of a cloth-based material, hard tops are instead made out of (you guessed it) a rigid material oftentimes closely mirroring the standard body panels of a vehicle. Although in production for more than 80 years, little change has been made to the basic design: it simply works.

Hard tops—otherwise known as coupe convertibles or coupe cabriolets—offer a more structurally rigid alternative to traditional soft tops, although extra bracing is still required. Hard tops are more secure against break-ins than soft tops while also providing a unique duality in looks; somewhat resembling the lines of a standard coupe with the top up while retaining all the looks and experience of a convertible with the top down.

While undoubtedly related to retractable hardtops, detachable hardtops instead eschew automated retraction in favor of manual removal and installation. Depending on the vehicle, the rigid roof panels can then be stowed in special compartments in the trunk when not in use. Although vehicles with detachable hardtops have existed since at least the 1950s, such designs have largely fallen out of favor.

Despite their lack of popularity, detachable hardtops nevertheless have their merits (and naturally, demerits). Being that this design is essentially a manually-removable hardtop, all the benefits of standard retractable hardtops are retained. These include excellent soundproofing and holistic durability versus soft tops, as well as superior structural rigidity too—although again, not quite to the level of a fixed-roof coupe.

However, detachable hard tops have fallen out of favor for a few reasons: primarily because most vehicles of this nature do not have the capability to store their roof panels when not in use, which can be cumbersome for those without sufficient space in their homes or garages to store them. Also, retractable hardtops are automated and relatively easier to use.

Few modern vehicles utilize such a design, although the venerable Jeep Wrangler continues to enjoy a stellar sales record.

Ultimately, there’s no wrong decision to make here. Soft tops, while less durable than their hardtop counterparts, are lighter and deploy more quickly. Conversely, hardtops (of both the retractable and detachable variety) take up more trunk space than soft tops, yet offer the driver an experience which can feel like a more seamless change from a top-down convertible to a top-up quasi-coupe.

All three designs offer their unique advantages and disadvantages, but which one would you choose to own and enjoy on a hot summer’s day? Let us know in the comments below!