Upcoming EVs to Look Out For 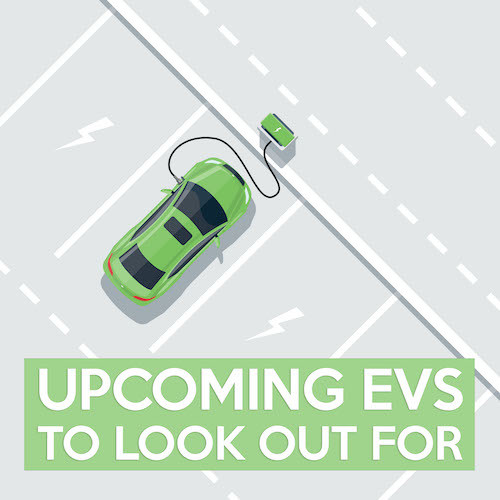 It’s no secret that EVs (electric vehicles) are taking the world by storm, with CNBC reporting that global EV sales could surge past the three million mark for the first time ever next year—a momentous jump of 36%.

Naturally, commensurate with a rise in consumer interest in EVs has been an increase in the variety of new EVs brought to market by nearly every major manufacturer: Audi, Ford, Nissan, Tesla, Volkswagen; just a few among a vast field of competitors. Thus the 2020s are a great time to be shopping for a new EV, and we’ve got you covered with a list of just some of the upcoming releases we can expect to see on our roads this decade.

The gorgeous Audi e-tron GT coupe will closely mirror its concept when it goes into production in the early 2020s. Based on the already-proven Porsche Taycan platform, Audi promises that the E-Tron GT will be able to drive up to 400 kilometers on a full charge, equivalent to almost 250 miles.

With sales planned to commence in 2021, the BMW i4 sedan will join the burgeoning BMW i sub-brand of the German marque. The battery pack—capable of fast charging—will provide up to 600 kilometers of range, equivalent to approximately 370 miles.

Although a full-size pickup truck might be the last vehicle you expect to be fitted with an electric motor, Ford plans to do just that with an optional electric power plant as part of the release of the next-generation F-150. Ford remains tight-lipped about this project although deliveries are reported to be tentatively scheduled in 2022.

This F-150 will likely face competition from the upcoming GMC Hummer EV; a stark revision of the original gas-guzzling Hummer H1, H2, and H3. GM hopes to squeeze out 400 miles of range from this new Hummer as well as a simply monstrous 1,000 horsepower in its most aggressive configuration.

Audi and BMW aren’t the only German luxury brands looking to expand their electric vehicle resume, as the Mercedes-Benz EQC—slated to be released in 2021—will be the first vehicle in the all-electric Mercedes EQ family. Per EPA testing, the EQC will provide an estimated range of 220 miles on a full charge.

10 years ago, Nissan helped lead the EV charge by introducing the best selling electric vehicle of all time: the Leaf. Looking to continue this legacy, the Nissan Ariya promises 270 to 280 miles of range in a compact crossover package.

Similar to the Audi e-tron GT, the next-generation Porsche Macan compact crossover will go all electric, utilizing the existing Porsche Taycan’s successful platform and technology. Details are still currently sparse and no range estimates are available, but we’ll surely get more information from Porsche as production of the next-generation Macan nears.

Although Rimac doesn’t have the same brand recognition as powerhouses such as Ferrari, Lamborghini, or even McLaren, this small Croation manufacturer has already made a name for itself in the form of their first release, the supremely capable Concept One. The Rimac C_Two hypercar serves as a successor following in the footsteps of its older sibling, and with 400 miles of range and over 1,200 horsepower, it already beats out many regular EVs.

Originally released and in production from 2008 to 2012, it’s the second generation Tesla Roadster that aims to be a success story in the 2020s. Elon Musk has made the bold claim that this new generation Roadster will accelerate from 0 to 100 kilometers per hour in as little as 1.9 seconds (2.1 seconds for the base model) with a whopping 1,000 kilometers of range—around 620 miles.

While only a concept vehicle has been released so far, the Volkswagen I.D. Buzz will likely be on dealership floors by 2022. Depending on which organization you ask, this electric minivan with endearing retro looks will boast a respectable driving range in the ballpark of 270 to 370 miles.

AND EVEN MORE TO COME!

Already well-ingrained in the automotive world, electric vehicles will only continue to rise in popularity both among private and commercial buyers. EVs have a bright, bright future ahead of them, and if you can’t snag any of these planned releases in the upcoming years, there will surely be plenty more to choose from throughout the rest of the 2020s and beyond!